Eau Claire is ready to join forces and become part of the largest national effort to recover America’s missing children. Fireball Run, an entertaining series which inspires travel, the production also raises awareness for missing children and Eau Claire has been selected to be the Green Flag City – or starting point – for the 11th season of this 26-episode adventure-travel competition series distributed by Amazon Instant Video.

President and CEO of the Child Rescue Network, a Florida-based 501©3 non-profit organization, Jeff Griesemer explains,  “Child Rescue Network is so excited to continue as the Official Charity for another season of the Fireball Run.  The incredible exposure we receive helps us in spreading our message of Empowerment, Not Fear, as well as providing hope to all the families still searching for a missing child.  Parents never give up and neither will we.”

The Fireball Run is the story of 40 rally teams as they compete in a legendary 2,000-mile, life-sized trivia game. NOT a Reality TV series, Fireball Run is factual entertainment. Factual television is a genre of non-fiction depicting actual events and people. In addition to being an entertaining series that explores the under-discovered communities in America and an economic driver – the Fireball Run uses it popularity to fuel the largest national effort to recover America’s Missing Children. Working with the Children’s Rescue Network, the Fireball Run has aided in the recovery of 50 children in their 10 seasons.

Eau Claire is not only the starting line for this adventure to bring the children home – but Luke Hanson, Executive Director of the EDC, and Julie Thoney,  Community Service & Economic Development Manager of Xcel, will be participating and handing out missing children posters throughout the entire 2,000 mile journey. 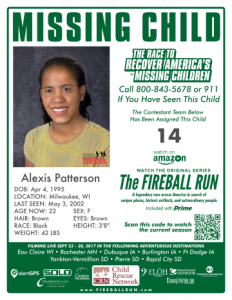 “I’m thrilled about taking the opportunity to share information on missing children during this journey and hope our efforts aid in bringing them home!”  Julie Thoney from Xcel Energy and one half of Eau Claire’s team in Season 11, the Xcelerators.

“The Race to Recover America’s Missing Children is a huge deal for Child Rescue Network”, says Jeff Griesemer, President and CEO. “Having these amazing vehicles rolling across the country with teams handing out posters of missing children raises a tremendous amount of awareness of the issue and the cases we’ve selected. It also works!  1 in 6 missing children are found because someone sees a picture and the Fireball Run teams will be distributing nearly 50,000 posters.  Over the years, 50 of the children that have been featured have been returned home and several as a direct result of the team’s efforts.”